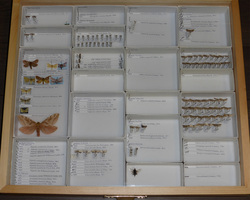 The foundation of knowledge of the BC fauna lies in valuable collections found throughout the world.
Some of the institutions and people that have significant collections of BC material are as follows.

Beaty Biodiversity Museum (BBM) University of British Columbia: Collection now houses over 600,000 specimens (All orders). Most holdings are from BC, the Yukon, and Alaska. contains about 25, 000 specimens including the majority of material from the collections of Blackmore, Jones and Buckell.  It also contains the butterfly collection of Harvey, who wrote the first good account of BC butterflies.  His and other Vancouver collections in the former Vancouver City Museum were transferred to the UBC collection when the museum moved to its modern buildings.  UBC Digital Collection.

Canadian National Collection (CNC)  Lepidoptera collection contains nearly 1.6 million specimens housed in over 8000 drawers and represents one of the best research collections of Lepidoptera in the world. It includes the Cockle collection from Kaslo, BC and significant material collected by CNC staff including McDunnough and material from northern BC collected by the Northern Canada Insect Surveys in the decade after WWII.

Northern Forestry Centre Arthropod Collection approximately 50,000 specimens of over 1,850 species of Lepidoptera, mostly from western Canada, with provincial/territorial occurrences recorded for all species.

Quesnel Museum A small (< 100 specimens) collection, but it is a historical collection of butterflies from the Okanagan

USNM or Smithsonian collection in Washington, DC contains about the same number of Lepidoptera as the CNC.  Important BC material includes the 20,000 specimens that Dyar collected in 1903 from Kaslo, BC, while a guest of Cockle and the J. F. Gates Clarke collection primarily of Micro moths but also an almost complete synoptic collection of BC and WA Macro Lepidoptera known at the time Clarke left for Cornell and the USNM at the beginning of the Great Depression.  Clarke material is estimated to be at least 10,000 specimens and is currently being databased by Jon Shepard.  The USNM also has the type material of Geometridae that were described by Rev. Taylor. These were purchased by the Barnes collection and later donated to the USNM.

Roger A. Ashton Collection (retired from collecting) – about 2,000 BC butterflies)

Jon H. Shepard (JHS) – around 40,000 BC moths (most) and butterflies. Jon H. Shepard collection contains 4,000 + Boloria [Clossiana] specimens representing most species, world wide and 65,000 moths.  Half of the moth collection is BC, YT and AB material and the rest is from mostly from adjacent northern Washington State.  Species coverage for BC species is 95%+ for Macro moths and 75% for none leaf mining Micro moths.


Please let me know of other collections that should be listed.  BCLeps@shaw.ca